It was by chance – or maybe not – that I read again in the Book of Mormon this week the prayer of the Prophet Alma as he and others began a mission to the wicked Zoramites. The phrase that jumps out at me and has at times pricked my conscience, struck me as such an important reminder today –

Which Souls are Precious?

This wicked community turned out to be comprised of two groups. One was disadvantaged, marginalized, oppressed and excluded from full participation in society. Thinking of their situation does resonate with the concerns and objectives of #blacklivesmatter. Maybe #theirsoulsareprecious could be just as appropriate a reminder.

Yet, Alma’s prayer was not just for these poor, oppressed people. His prayer was for the whole community. It was also for the prideful, privileged who were persecuting the others. Their souls were also precious to their Father in Heaven. They were His children too.

I am aware of reactions toward #alllivesmatter and the feeling that it misses the point and trivializes the injustices of so many years. But can you say the souls of some who may not have been treated as precious, are indeed precious, without recognizing the preciousness of all souls?

Hasn’t the problem all along been the human tendency to put people into a category judged to be somehow worth less than others or inherently bad and then using that judgment as justification for depriving them of privileges or treating them badly? Is it really any different when that judgment is made based on the color or one’s skin or the uniform one wears? Or maybe even the color and words on a hat they wear?

Yes, some people do horrible things to other people and they do need to be held accountable for their behavior. Does this justify putting all who share some identifying characteristic with an offender, into a category judged as bad and therefore deserving of disrespect, contempt, attacks and mistreatment?

Does mistreating others make one’s soul less precious to their Father? I am sure such behavior offends and pains Him. Seeing all souls as precious and condemning unacceptable behavior are not mutually exclusive. Any good parent knows that the preciousness of the souls of their children is the very reason they must learn right from wrong, even at times through suffering hard consequences.

Maybe, whenever we have feelings other than love toward a group or an individual human being, or a tendency to ignore or discount someone, we need to get on our knees and pray to the Father of us all, acknowledging to Him as Alma did, that “their souls are precious.” Pray for them, for their needs, but also pray for ourselves, that our hearts may be softened and that we may see others as He sees them – as the precious souls they are.

Like much of the world recently, I was deeply saddened to see the great Notre Dame Cathedral burning. It is sad to see destruction of anything historical or culturally and religiously significant, especially something that has stood as a symbol for Centuries.

I have read this week, the words of our Savior about the Temple in Jerusalem being destroyed and raised again the 3rd day. (See John 2:18-21; Matthew 26:61, 27:40; Mark 14:58) We of course, know that he was not talking about the physical temple, but His own physical temple, His body.

Those who heard him however, expressed disbelief that such as magnificent structure that had taken so long to build could so easily be destroyed. We have heard other similar reactions to prophesy about destruction of great cities. History has shown us that, yes the great Temple in Jerusalem was destroyed after all.

The reality is that anything man creates out of the elements of this temporal world is impermanent and can be destroyed. As much as we, with scientific knowledge and technical skill, try to create buildings to be able to withstand earthquakes, floods, fire and wind, some still are destroyed.

The building of physical buildings and creating material objects is the work of humans. At times God has commanded His people to build Temples and other structures. Whether He could create them Himself is not the point – after all He created the mountains which served as temples. The purpose and function of a building is more important than design or beauty. Part of that purpose being the obedience and sacrifice and offerings from us mortals to create something in His name.

While living His mortal life, Jesus the carpenter built things with His hands just like we do. Jesus didn’t use His power to create material things. Instead, His mortal work dealt with individuals. He healed bodies and ministered to souls. People were the subjects of His great power, glory and love. That should be a testimony to us that we, His children, are His priority.

That morning when Jesus rose from the tomb, gives perspective to our mortal experience – to creation and destruction, to life and death.

Through His resurrection bodies and spirits can be reunited and resurrected to a perfect immortal form. Through Him broken hearts are rebuilt and damaged souls healed. Through Him we can be restored to a sinless, pure, innocent state, able to live in His presence.

Ultimately, as significant as magnificent human creations may be to us, we are more important than buildings or objects to Him – the Creator of all things.

Five lessons about Charity that I have learned through life and study: what it is, what it is not, how to obtain it, and why it is so critical. 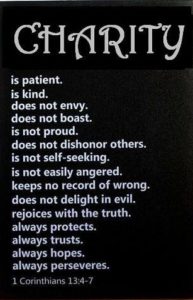 Many years ago I made a serious study of charity. I gave some talks and presentations on the subject and wrote about it. I even entertained thoughts that there might be a book to be written on the subject. At that time, I thought I had some insight into charity, but as time and life continued I realized my shortcomings in living the principle. Through some experiences I have had more recently, I think I am beginning to have a better understanding of charity. Though I am sure I have much more to learn, I will share a few lessons.

END_OF_DOCUMENT_TOKEN_TO_BE_REPLACED

We hear much today about the Second Great Commandment – “love your neighbor as yourself” – but in the insistence that this is of supreme importance and with some using this as a weapon against Christians to point out supposed hypocrisy, the First Great Commandment – loving God – seems to get little or no attention. 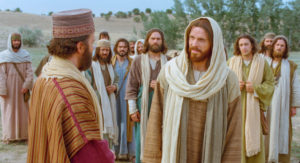 Loving our neighbors is a natural outgrowth of keeping the first commandment. Keeping the second without the first can lead to questions about whether the second is actually being kept at all.

END_OF_DOCUMENT_TOKEN_TO_BE_REPLACED

I am concerned about the battles raging in our society – the battles which divide us into opposing groups, and also the internal battles for individual souls. These are continuations of a war which began long ago. We have no recollection of it, but scriptural accounts can stir up feelings and give us a sense of the intensity and eternal significance of the struggle. (See Revelation 12:7-9, Moses 4:1-4, Abraham 3:27-28)

What makes this war is so challenging on an individual level – and that is the level that it really counts – are the realities of our current mortal existence.

I believe that we are essentially spiritual beings. We are actually the spiritual offspring of God, and as such have at our spiritual core a divine nature and potential. In order for us to be able to progress toward that potential, we have been given the opportunity of this mortal existence. We have been housed in physical bodies and placed in a temporal world. I do not believe that everything about these physical bodies and this world are inherently bad or evil. These bodies are marvelous creations and allow us to do wonderful things. Our world is filled with so much that is beautiful and good. However, being a spiritual being inside a physical body creates the basis of our test, and the core of the battle – will the spiritual overcome the physical and progress, or will the spiritual yield to the physical?

END_OF_DOCUMENT_TOKEN_TO_BE_REPLACED 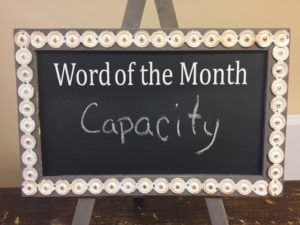 Capacity is a word that keeps jumping out at me recently. Shopping for appliances, I heard much about “capacity.” Often capacity is viewed in terms of quantity – the amount of space which can be filled or contain something. The implication is that more or larger is better. When talking about human capacities, whether that be mental, physical, emotional or spiritual, we are usually thinking about abilities or potential.

Physical capacity usually involves strength, endurance, and stamina. Some people are able to physically do more or for longer because of greater physical capacity.

Mental capacity is what is referred to as the power of receiving and holding knowledge – the ability to comprehend, reason, to learn and understand.

Emotional capacity is something we don’t think much about, but I think it is real. I recently heard someone comment about another’s “capacity for chaos”. Some people seem to be able to handle stress, adapt to changes or deal with upsetting situations better than others. Some have greater capacity for self-reliance. We look to first responders and leaders for such capacity in dealing with emergencies.

Spiritual Capacity is about the potential of our souls to develop and expand and progress. Our goal may be described as “enlightenment” or becoming more Christlike – more loving, understanding and giving.