When did “privilege” become a dirty word? Is privilege a blessing or a cause of shame? The more I ponder on privilege and the way the word is being used today, the more I realize that the real problem is not privilege at all – it is pride.* 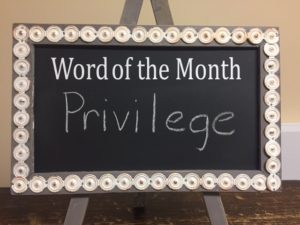 I have heard the word “privilege”, especially “white privilege” being hurled at people as an insult. I have had the phrase “your privilege is showing” thrown at me, as if that somehow meant I have no social conscience. This is not how I remember this word being used.

I can recall a number of movies – you know the ones – where a group of people are facing imminent death and destruction, and one turns to the others and says something like “It has been a privilege serving with you” or even something to imply it has been a privilege being with them through a difficult time. I have heard sincere, humble mention of privileges of living in this free country, gaining an education, having a family and a home. I have felt it a privilege and an honor to be in the presence of certain people.

The definition of privilege implies that there are certain rights, advantages or opportunities afforded to some while denied to others. It refers to something additional or special that was unexpected and unearned. I have always thought of it as associated with a sense that it is undeserved and therefore accompanied by gratitude. A privilege, when considered a blessing, recognizes the source of the privilege as divine. Can I express appreciation for my good health, education and somewhat prosperous circumstances without being put into a category with the rich and powerful or intolerant bigots? Can such an expression be consistent with understanding and concern that others do not have the same opportunities or blessings? Can one be privileged and also be humble and grateful and compassionate?

Does the understood source of privilege make a difference? Too often we look at privileges as being granted, bestowed, or denied by government or society as a whole based on certain characteristics or conditions, creating groups of “haves” and “have nots”. This thinking raises questions about what is fair. Privilege is not fair. By definition is involves some receiving what others do not – that’s what makes it privilege. One may be justified in pointing out some unfairness of life, but is it fair or even necessary to blame that unfairness on those who may be the recipients of undeserved and unsought privileges?

Privilege is often used to describe those who are successful, but success cannot be solely attributed to privilege. One may be privileged to have opportunities others may not have, but individual choice and effort make the difference and can not be discounted. Those who are privileged, successful and also wise realize that an obligation to serve and give back accompanies privilege. “Where much is given, much is required.” (See Luke 12:48)

The problem with privilege comes when we forget the “undeserved” part of it, when some come to feel that they do deserve their advantages because they are somehow better than others. This is more an issue of pride than privilege. Pride is what gives us the feeling that we are better and that those who lack what we have are somehow inferior. Add to that the idea that such advantages in one area, such as monetary, also entitle one to greater privileges, such as power and influence. This also is pride. Forgetting that others may lack many things one takes for granted can also lead to pride.

Pride is not limited to the privileged, however. Those who consider themselves the “underprivileged” but constantly point out the unfairness of it, are also suffering from pride. Pride is manifest in those who are not privileged when they envy what others have. What follows is a feeling that one should be entitled to all that others have, that they are just as deserving of privilege. If privilege is undeserved, then why the feeling of entitlement? Does seeing government as the granter of privilege, encourage this sense of entitlement to all things that anyone may have?

Is privilege only a bad thing when it is about something I do not have? If we were all to list our privileges we would probably come up with very different lists, especially if privileges are things people consider blessings for which they are grateful. Those same people could also make a long list of problems and challenges in their lives. Some with wealth suffer from physical or mental health problems. Does this change their privilege? Some without much money may feel very privileged that they are healthy. Some wise people even come to consider significant life challenges as a blessing or privilege.

I would like to be able to express gratitude for the many privileges I enjoy, fully recognizing that these blessings come from God.

*I could do a word of the month on Pride, but President Ezra Taft Benson gave the most perfect discourse on pride  – “Beware of Pride” – that I have ever heard, so I would encourage all to read.