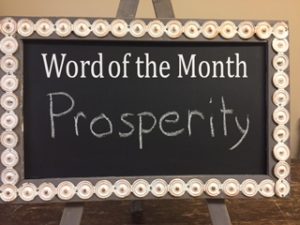 In the Book of Mormon we repeatedly hear the admonition given to residents of this continent: “If ye keep my commandments, ye shall prosper in the land.” In that Book we also see this played out in what is commonly known as “the pride cycle”. With righteous living there is prosperity. This is first seen in growth, development, progress, and general contentment without conflict. Gradually it tends to grow into wealth, at least for some. Then the cycle turns as the focus on material wealth creates divisions with the haves seeking more and feeling superior to the have-nots. Eventually it leads to destruction, either through conflicts within or weakening and vulnerability to attacks from enemies. In the Book of Mormon this often cycled back when war and devastation humbled everyone.

It is common for us to equate prosperity with wealth. Recently I heard a comment that prosperity is more about happiness than money. Definitions of prosper include synonyms like succeed, thrive, flourish, and grow in a vigorous way. Wealth may be a by-product of prosperity, but it can be dangerous to think of it as the sole definition or the ultimate goal.

Years ago, as I was struggling with a home-based business, I attended a workshop which included an exercise in writing a mission statement. The lasting outcome of this workshop was the realization that for me personally, success has nothing to do with money. I eventually gave up this business, not only because I was not making a profit and I suffered negative physical effects, but mainly because I realized that it gave me much more frustration than satisfaction. I was not successful. I was not happy. I was not prosperous.

As I have reflected over my life, I see that I have defined success more in terms of accomplishing something that I set out to do. My first career was as a Social Worker, certainly not something that I could make more money at though working harder, and also something that does not always see great changes for the better. Success to me is about reaching goals or completing projects in a satisfying way. If I have put forth my best efforts to accomplish something, I feel successful. This does not require any comparison with anyone else or measurement against some numbers. It is mostly internal.

My frustrating experience this year planting another vegetable garden caused me to reflect a bit on prosperity. Since past societies were largely agrarian, prosperity was often associated with bountiful harvests. A prosperous garden is one which would allow me to literally enjoy the fruits of my labors. It would produce sufficient to satisfy my appetite and also have surplus to share. If my harvest is bountiful this year, it will be in spite of the weather which gave me a bad start.

Prosperity or thriving can be related to being safe or protected from destructive forces – from things that would deteriorate or destroy, thus allowing growth. These are blessings that come from obedience to God’s commandments. The grace of God can remove – or more often compensate for – any forces which might impede growth. It is possible to be “prosperous”, yet not wealthy by economic standards. It is also possible to be prosperous in less than desirable circumstances.

In the Book of Mormon we read of a time of prosperity in the midst of war. After some serious battles, Captain Moroni united his people in a great mutual effort to fortify their cities against future attack and to build new cities in strategic locations. They were living in anticipation of an attack from their enemy at any time, yet we are told that these were prosperous circumstances.

To explain why, we are reminded of the promise from the Lord to the children of Lehi, “Blessed art thou and thy children; and they shall be blessed, inasmuch as they shall keep my commandments they shall prosper in the land. . . And we see that these promises have been verified to the people of Nephi; for it has been their quarrelings and their contentions, yea, their murderings, and their plunderings, their idolatry, their whoredoms, and their abominations, which were among themselves, which brought upon them their wars and their destructions. And those who were faithful in keeping the commandments of the Lord were delivered at all times.” (see Alma 50:17-23)

Prosperity for a society should not be measured so much by things like economic growth, for that most often leads to the kind of wealth of a few that perpetuates the pride cycle through division, envy, distrust and abuses of power. A prosperous society is also not one where everyone is made the same economically. Prosperous societies would probably still have the poor and needy, but truly prosperous individuals have a proper sense of needs vs. wants and a willingness to give to those who lack as well as to help others become successful as they have. A society which thrives and grows does so when the majority of its citizens value and live sound principles of education, hard work, and honesty, as well as compassion, generosity, and service. In other words, when people strive to keep the commandments of God, they prosper.