“I teach them correct principles and they govern themselves.”

This statement was given by Joseph Smith as an answer to a question about how he governed the Church of Jesus Christ of Latter-day Saints. I think it is very applicable to a secular “government of the people, by the people, and for the people.” I have reflected on this statement as I have become very concerned about what is happening in our country during this time of crisis.

The principles which should guide all actions by our government are outlined in the Declaration of Independence and the Constitution of the United States. Correct principles also include principles such as those in the 10 Commandments. People should treat others with respect and kindness, as they would want to be treated. Life is sacred and should be protected. Self-direction and self-reliance are sound and valued principles.
At times of crisis like this we see situations where some needs become urgent and some principles take precedence over others. The challenge of meeting urgent needs while maintaining rights according to those principles is a role of government.

Principles in the constitution affirm individual rights of liberty, exhibited in the opportunity to travel, to engage in business, to participate in activities of our choice. The Bill of Rights specifically spell out rights to assemble and to practice religion. People need to be able to work and provide for themselves and their families. They have need of goods and services to preserve life. Generally, government should not interfere with these rights. This is a basic principle of the Constitution.

Yet, government has responsibility to keep its citizens safe, to provide defense against that which would cause harm and endanger life. There may be times when the suspension of individual rights may be necessary in order to protect us, but those situations should be very rare and action taken with great caution. The reason for caution is human nature and the tendency among those with power to exercise “unrighteous dominion.” When people in power seek more power, they put themselves and their wisdom above others and use power to order actions and suspend individual rights. If successful in a crisis, there is not much to stop this from occurring without a crisis, with orders being self-serving, rather than for public good.

Maintaining a balance between preserving inherent and constitutional rights and providing protection can be complicated. Mutual trust is vital, yet sadly lacking today.

Allowing citizens to “govern themselves” requires that government trusts them to do the right things. It includes an assumption that the majority of citizens are morally upright, good people, who want to do good. When good, intelligent people are given accurate and sound information they generally will make choices to benefit all, even when those choices might limit their own freedom to do what they want.

If government trusts their citizens, they need only provide clear, accurate information and make recommendations for action. Then citizens can freely, with their own agency intact, act to make things better or at least not worse.Sure, there will always be those who are not trustworthy, who will selfishly do stupid things that endanger others. They are the ones laws are written for anyway. But to impose orders and threaten penalties upon law abiding citizens shows a dangerous lack of trust.

Trust of the government by the people is also necessary. Governments are mandated to educate their citizens, and that education should include the teaching of correct principles–not only the principles underlying our government, but correct principles about science, history, and human nature.

Besides being well educated, citizens need to be well informed about current situations in order to be able to use their agency to make wise decisions. This is where a thorough and impartial media is critical. We should be able to trust the media to give us accurate and unbiased information. I see a lack of trust today in both directions.

Public education has been influenced by those who would promote certain agendas over teaching truth. Education about the history of this country is no longer a priority, so we are lacking in understanding about those founding principles and the sacrifices made by those in the past to secure the freedoms we enjoy. Moral education, which early in this country was a significant part of education, has been dismissed as unfairly promoting religion. The ability to regurgitate facts through tests is now preferred to teaching students how to think and reason. What we have now are many citizens blindly following the teachings and direction of whatever factions they trust and suspicious of all other sources.

Which leads back to trust in the other direction. By creating an educational system which lacks moral training, we have citizens lacking in moral judgment, and a government which does not trust them to make wise choices in a crisis. Add to that people in government more concerned about power than the welfare of citizens issuing orders that restrict individual freedom, which increases distrust of government.

I hope we come out of this crisis with our freedom intact and a greater appreciation of that liberty.

During the past few months of living with my now 18 month old granddaughter, I have been reminded of the innate human drive toward self-determination. Even at a very young age, little humans show individual will and a desire to do what they want. As soon as they have some mobility they will move toward an object that they desire. As small motor skills develop they grasp and manipulate objects to explore them. They want to go where they want and do what they want.

One large drawback for this is the lack of ability to communicate what one wants. One of the first, and probably most used word for children is “no”. Though they might not be able to articulate what exactly they want, they are able to let you know exactly what they do not want.

“No” is also used frequently toward children as they seek after what they want. Parents have a challenging role to provide an environment for children to learn and develop while keeping them safe from danger. Some are better than others at balancing this. There are parents who provide more than needed direction and restriction in the name of protection.

Key to maintaining a good relationship through this balancing act is trust. If children feel loved and secure they learn to trust that their parents want what is best for them. Parents and others can try to teach children about dangers and how to avoid them, but sometimes the best teacher is experience. Unfortunately, over-protection often deprives children of such experiences. There are always some children more inclined to be obedient who might become overly dependent. And others more independent might resist restrictions and become rebellious.

The founders of the United States of America recognized the human need for self-determination. They saw monarchy and the systems of the old world as working against that. In forming a government “of the people, by the people and for the people” they realized the value of individuals and the importance of individual rights. Many resisted ratifying the new Constitution because of the lack of a Bill of Rights. Why was this so important? They wanted to make sure that governmental powers were limited and preserved the rights of individual citizens toward self-determination.

Government also has a stated role to provide protection to citizens from threats and defense from attacks. This requires a balance not unlike the parental balance between encouraging development while protecting. There may be times when safety would require limiting individual freedom to do certain things. This is the argument given at the present time regarding this pandemic. Yet, there are others pointing out the dangers of increased government control.

If the underlying condition with parenting is trust, then it would seem that trust of government would be essential for citizens to accept restrictions in the name of safety. But government is really people. We have elected officials who are supposed to act in the public interest, but too often act according to the own self-interest. We have officials who seem to thrive on excessive use of power. Just because someone has been elected to an office, does not mean that they have superior intelligence or knowledge and know best what to do. Yes, they often rely on “experts” for information, but do these experts also have other motives?

Our constitution allows for the people to vote to remove from office those who they feel are not representing them and their interests. Unfortunately a huge bureaucracy consisting of officials, not elected by or accountable to the people, is in the position of making and enforcing regulations.

Once power is used to limit individual freedoms, even in the face of a real threat, it can become easier for those in power to see other “threats” warranting further limits of freedom. Over-controlling government, just like over-protective parents, can restrict growth and foster dependence, especially among those inclined to be trusting and obedient. But it also can provoke those inclined toward independence and lacking trust in government to the point of rebellion.

The federal government is furthest removed from the people and much less in tune with the diverse situations in various parts of the country. It would make sense that elected officials on the most local levels would know best their own constituents and their situation and needs. They would seem more receptive to input from their neighbors about what is needed. It is easier for constituents to communicate directly with them and be more involved. This is one reason the founders created a Republic and left certain rights with States. 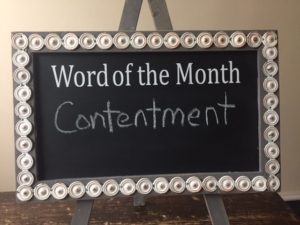 Am I happy? Am I fulfilled? Am I content? Is there a difference? Is there a conflict between happiness and contentment or is it an issue of perspective and balance? I have pondered much about this for some time. The topic of contentment brings forth a plethora of proverbs, platitudes, quotes and memes. We all tend to see the wisdom in such sayings, but the actual practice of contentment in our lives is a little more complicated and difficult.

So after much contemplation I will offer my own thoughts and platitudes:

Contentment is about gratitude – appreciating what you have rather than focusing on or seeking for what you don’t have, what others have, or what may be out of reach at this time.

The world would have us compare ourselves with others, to feel that it is not fair that some have so much more than we have, to look at ourselves as lacking in one way or another. There will always be those who are more wealthy, beautiful, successful or powerful than we are, but there will also be those who have less than we in all areas. Contentment does not compare and see a lack, but appreciates what we do have.