Character reflects how we actually are – deep down and real. It can not be faked. It is reflected in how we behave when we are alone, or when we think no one is watching or listening. 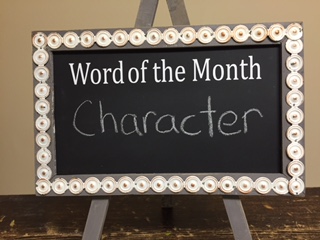 This month I have chosen to discuss “character”. There are several definitions of the word, but I want to focus on that which refers to specific traits, qualities or attributes reflected in a person’s personality and behavior – the character of an individual. This could be looked at in terms of patterns of behavior, or a collection of various moral and mental qualities. Sometime the term is used to refer to more excellent qualities of character, but character can also be negative or lacking.

The term reputation might be used along with character, but I think the two are very different and almost opposite. Reputation relies upon the opinions of people. It involves public perception of inner qualities, rather than the inner qualities themselves. Because it involves the opinions and approval of other, some people put much effort into trying to convince others that they are upstanding and upright, as if the approval of others actually makes them good and acceptable. They are careful to present themselves in the best light, and also may put much effort into hiding flaws. There can be a great discrepancy between this public persona and the actual reality of their character. It can be very easy to misjudge the character of others, either because they may be very good at presenting a respectable public face, or because we may selectively look for and magnify apparent flaws of those we judge to be lacking.

I feel that “character” as opposed to reputation, reflects how we actually are – deep down and real. It can not be faked. It is reflected in how we behave when we are alone, or when we think no one is watching or listening. Reputation is subject to the judgement of other imperfect people. God is the real judge of character, for no one can fool him and it is ultimately His judgement which really matters.

Integrity is a quality often associated with good or noble character. It involves behavior consistent with values and beliefs held. Those whose behavior is contrary to professed beliefs are considered to be hypocritical. But if character can be either good or bad, then those beliefs, values and principles with which one acts consistently must also be good for one to have good character. The more excellent those principles, the stronger and more noble is the character of one who lives in harmony with them, especially when living those principles in the face of opposition from others.

In preparing a Sunday School lesson on the Sermon on the Mount, I read a quote by President Harold B. Lee (former President of the Church of Jesus Christ of Latter-day Saints):

“In His Sermon on the Mount the Master has given us somewhat of a revelation of His own character, which was perfect, or what might be said to be ‘an autobiography, every syllable of which He had written down in deeds.’ and in so doing has given us a blueprint for our own lives.”

Jesus Christ exemplified a perfect character. If we are to become perfect, even as He is perfect, then we should look to Him as an example – the perfect example.

Before you dismiss this commandment to be perfect as being impossible, you must also realize that character is not fixed and unchangeable. Because character is genuinely who we are, we cannot simply say that “this is the way we are” and that should be okay. The whole point of life is to progress and improve. Character is something that develops – it can be refined and improved. It first requires some honesty and awareness of our current character flaws. We all have them, but do we want to face them? A core component at the center of the Twelve Steps (Step Six) is being ready to have defects of character removed. This of course comes after honestly assessing exactly what those defects are and taking responsibility for them. 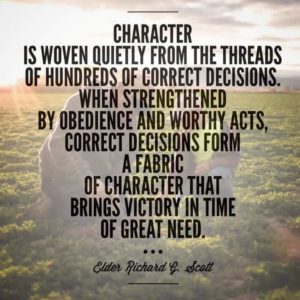 Many people put great effort into hiding character flaws from the world. Christ would have us come to Him and allow Him to help us overcome our faults and refine our character. This is a process requiring both our desire and effort and His grace. We cannot become like Him without Him. We need to seek and ask for those qualities that would improve our character. And we need to keep trying as we continue to slip backward and make mistakes.