In a world with so many conflicting voices and contradictory facts, how can we distinguish real truth from all that is erroneous and false?

With any statement made by a public figure, especially a politician, a “fact-checking” process immediately begins. This process may seem to be intended to keep such people honest, but the motive is more likely to create a “gotcha” moment–to catch someone in a lie, error, or untruth; to in effect label them a liar; cast doubt on their intentions; even discredit all they have said or may say. But is fact-checking really an accurate or honest way to assess someone’s honesty? Do facts really reflect the truth of the message? 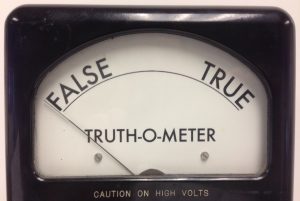 Facts are simply pieces of information which are assumed to be true, usually because they have been recorded or can be verified. It is the interpretation of facts which is significant–what do they mean? That interpretation of fact varies depending on the perspective and foundational beliefs of any particular person or group. With skill, any select group of facts can be used to successfully argue almost any point. Other facts which may contradict a hypothesis or suggest other meanings are left out of such arguments. Even when intentional efforts are made to find all of the relevant facts, there may be others which may not be known or available at that point in time. Often facts are selected and deemed relevant because they fit into the framework of an accepted belief system. We intentionally, though often not consciously, seek facts that reinforce what we already believe to be true. We also discount or ignore facts which do not fit that belief system. So fact-checking is usually self-serving, seeking to reinforce and validate a position already accepted by some to be true and in the process point a finger of doubt and shame at someone with another perspective who did not present the appropriate or correct set of facts.

Particular words or language may be used to state as fact things that are more accurately opinions or theories. The use of terms like “so-called” or “supposed” or even the use of quotation marks like these, are used to question or discount what may actually be fact. It often depends on the perspective of writers who presents as fact what they accept, while casting doubt on the opposite point of view.

Fact-checking flourishes in an atmosphere of relative truth. It is as if truth can be determined by the prevailing collection of facts interpreted in the currently popular or socially accepted way. Of course, that interpretation of truth may vary through time or depending on whichever group may have the most influence at the time. There are those who seek to create their own truth, finding facts to support and promote it. Popular opinion often determines the truth of the day. So is there real truth or simply whatever group of interpreted facts are commonly accepted as being true?

I heard someone use the phrase “erroneous conjecture” which I think better reflects the contrast between truth and falsehoods. It is the process of gathering and reasoning with facts, assumptions, theories, and opinions, which may result in a conclusion which is not true. That conjecture, though containing some facts and partial truths, is actually in error. The result is incorrect or false. This coming to a false conclusion in many cases is an innocent mistake. Other times it is intentionally misleading.

Guile is an interesting term that is not used much today. The most familiar use of the term is found in Genesis when the “serpent beguiled” Adam and Eve in the Garden of Eden. (Genesis 3:1-13) The definition of guile implies slyness, cunning, and craftiness in dealing with others. Intent is key to guile–the intent to trick, mislead, or deceive. Real facts can be selected and interpreted in a way that is misleading or intended to deceive. Are such statements truth or actually lies? If truth is determined solely by fact, you might say yes, they are true. But if some facts are ignored, while others twisted in a way that presents a deceptive view, isn’t the result a lie?

People may deceive unintentionally as well. Usually this is because they themselves have already been beguiled or deceived. They have bought into a set of facts or an interpretation of selected facts that is not correct. They then select other facts to reinforce that deception, often while ignoring or discounting other contradictory facts.

In this media age, we have access to information from a wide range of perspectives, yet most of us turn to trusted sources and accept what they report as truth. We may view some sources on extreme ends of the spectrum as being biased and probably untrue, but don’t always see the bias in the ones we trust. I am surprised when people whom I consider to be intelligent and reasonable do not even attempt to study or understand both sides of an issue, but just parrot taking points from their side as if they are obviously true and what is said from the other side is obviously false and therefore no real consideration of that position is necessary. Such people may be very sincere and persuasive because that view is what they have come to believe. They also may be skeptical and critical of viewpoints which conflict with their truth. They can sincerely think they are doing others a favor in their efforts to “convince them of the truth.”

If we recognize that it is not other people who are being intentionally deceptive, but such guile and deception originates from the “father of lies” who beguiled our first parents, we might treat those with different beliefs or opinions with more compassion. We can accept their well-intentioned though misguided efforts to convince us of untruths. We can begin to recognize how this great deceiver uses and abuses facts to his intended ends–to lead us away from truth and against each other. Unfortunately, he has won over some very powerful and persuasive and committed people.

There is absolute truth. Truth goes beyond facts or simple bits of information. Absolute truths reflect eternal laws–laws of nature and of God. All of the pertinent facts to support or explain such truths may not be currently known or understood, but that does not make them untrue. The reality is that we may not have the whole picture. Our puny finite mortal minds and reasoning ability may be lacking.

In our quest to determine truth, we can use the brains and gifts of reasoning God has given us to seriously study things out. However with so much deception surrounding us, we can easily be deceived, even by “experts”. If the only sources we consider and trust are the philosophies of men, we are subject to that pull of popular opinion – “tossed about by every wind of doctrine”. (Ephesians 4:14) Reasoning takes time and effort and it appears to me that most people don’t want to take the time to read more than headlines, memes, or a statement longer than a paragraph, let alone spending time questioning and pondering.

A sincere quest to distinguish truth from error requires a bit of humility, which is sadly lacking in our world. No one wants to be wrong. We all want to be on the right side. I have personally found the most important question we can ask ourselves is “Could I be wrong?” Until we can courageously and sincerely ask ourselves this question, we will just seek out, even subconsciously, those facts which support our view and discount any contrary ones. Until we are open to the idea that there may be some other truth than what we currently understand, we will not even begin to learn.

Courage is necessary because getting the answer that we are wrong, even possibly partially wrong, is not only damaging to the ego, but would require us to make a change. Changing one’s mind, or opinion, or actions is scary stuff. It is hard to admit that we have been deceived. We may feel like a fool for believing something that is not true.

It is even harder to speak out or change a course of action based on a new understanding of truth. We risk the outrage and rejection of our side–those with whom we have been aligned and with whom we have shared conviction and actions. We must expect opposition from those for whom our declaration of new truth seems to be an accusation of their own lies or deception. We will face continued attempts to “bring us back around to the right way of thinking”.

Such changes of mind can be described as a paradigm shift. This can feel as if one’s world is falling apart – probably because that world view has fallen apart. This creates uncertainty because without that foundational view, we are not sure how to act going forward. Being convinced of a different view of truth based only on reason and study of facts, as sincere and serious as that may be, may not be enough. The easier path is to revert back to previous, comfortable beliefs and ways.

A MORE SURE WAY

In discerning truth we do not have to rely solely on facts, our own limited reasoning abilities, or the interpretations of other people, no matter how knowledgeable or trusted they may be. There is a more sure way. It goes beyond facts and human reason. I believe that deep within each of us is a moral compass which can help us determine right from wrong. It requires some real intent and sensitivity to access. Without practice it becomes less able to help us discern and can become totally ineffective as we trust more and more in lies and deception.

There is a sure way to know the truth of all things. We can discern truth from lies by going to the source of truth. God is the source of all truth. He is a “God of truth and can not lie.” We can find revealed truths in sacred scriptures, but the many variations in interpretation may make that challenging. Such a search in scripture must be done with an open heart, real intent, and faith.

As he concluded his record, the ancient prophet Moroni explained this sure way:

And when ye shall receive these things, I would exhort you that ye would ask God, the Eternal Father, in the name of Christ, if these things are not true; and if ye shall ask with a sincere heart, with real intent, having faith in Christ, he will manifest the truth of it unto you, by the power of the Holy Ghost. And by the power of the Holy Ghost ye may know the truth of all things. (Moroni 10:4-5)

By sincerely asking God, through the Holy Ghost we can know the truth, not only of scripture, but of all things. We can have a confirmation of truth from the source of all truth. The conditions mentioned are critical. We must have faith that God knows the truth and will reveal it to us. We must sincerely want to know, even if that knowledge means that we have been wrong. Real intent means that we fully intend to act according to what we learn – to change our actions and our mind. It is this conviction of truth revealed from the source of truth which gives us the courage and strength to make a commitment to continue forward with new-found truth. With practice, this process helps us to develop the spiritual sensitivity to recognize impressions of the Spirit, putting us in a more sure place to discern truth from all of the erroneous messages that surround us.