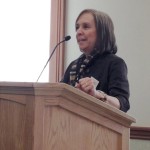 Somehow, we humans love praise. I have to admit I do like hearing “Good job” “I really enjoyed that” “That was great”. I think the problem comes when that becomes our focus – what we seek most. “The praise of men” (John 12:43) or “The honor of the world”.

Our society has taken this to extremes. Is it any wonder that people are so self-absorbed when you consider these trends:

Children come into this world small and helpless. Their world does center around them. Others are there to meet their needs or are just in the background like objects. Children need a certain amount of recognition, reinforcement, and even praise to develop healthy self-esteem. Too much however, seems to encourage the focus on self past the point where it is healthy.

As Erik Erikson and other developmental psychologists have pointed out, somewhere in the process of becoming an adult, we are supposed to “get over ourselves” and turn outward. The focus should shift from our needs to nurturing others, being altruistic, and making a positive contribution to society. Selflessness is kind of the height of human maturity. Unfortunately many “grown ups” never quite get there.

Marriage and parenthood provide the best environment to develop selflessness. Marriages don’t tend to survive when one or both partners seek only what they want. The dependence and neediness of small children necessitates putting their needs first. Intentionally avoiding or delaying marriage and/or parenthood can deprive someone of these opportunities and encourage perpetual self-focus. But even parenthood is no guarantee of increased selflessness. Some parents seem to see their children as extensions of themselves, finding personal validation in their achievements or becoming devastated by their bad choices.

So how does one get past the “all about me” thinking? Sometimes in an attempt to be or appear “selfless”, people unnecessarily sacrifice for others in kind of a martyr-like way. They frequently remind those they serve or sacrifice for about all they have done for them. Isn’t that still “all about me?”

Self-centeredness is actually part of our “natural man”. The one who is an “enemy to God” (Mosiah 3:19) and as such is influenced by THE Enemy of God. The natural man is full of Pride and envy. This kind of pride is about comparisons and a need to feel better than others. Pride focuses on the self. It is all about ME. There would be no need to compare unless WE have a need to feel special and the center of everything.

Satan, from the beginning was “all about me” – seeking glory and power. (Moses 4:1) So is it surprising that his tactics include encouraging us to seek self-gratification, attention, and influence? By following his lead, we become more like him.

Recognizing that the encouragement of this self-centeredness comes from Satan, to overcome it we must look to the opposite – to God. Jesus Christ is the one perfect example of selflessness. The one life that in the history and purpose of the whole world It really was all about Him, yet He only sought to do the will of His Father and give glory to Him. (Moses 4:2) He is God, yet He came to earth as a helpless baby – just as we did. He did not come in a show of power demanding attention from everyone. In fact, He resisted Satan’s temptations to do just that. (Matthew 4:5-10) He did not live a pretentious life. He had very few material possessions, and certainly no concern with how he appeared to others, or gaining approval or popularity. He taught with a focus on His message, not on himself. He never sought publicity. In fact at times He told others not to tell about their miraculous healing. He never changed his message to make people like him. He taught truth. He never turned away anyone seeking help or healing. He was constantly attuned to the needs of others. In all things, He did the will of His Father, never His own.

This kind of true selflessness epitomized in the Savior’s example is not something we humans are naturally capable of, though some seem to be more inclined toward it than others. It is only by becoming a disciple of Christ and through His atonement overcoming our “natural man” that we can become truly selfless as He was. It is a process.

This Christ-like selflesness is expressed in Charity, the pure love of Christ which he bestows on all who are true followers.(Moroni 7:48) It is the opposite of “all about me” pride. Characteristics of charity include being “not puffed up, vaunteth not itself, seeketh not her own.” (1 Corinthians 13:4-7; Moroni 7:45) Charity looks outward to the needs of others, not inward to our need to feel useful, helpful, or wonderful. The ancient prophet Mormon reminds us that charity is the antidote for those concerns about what other think of us: “I fear not what man can do; for perfect love casteth out all fear.” (Moroni 8:16)

The scriptures counsel us to “become as a child, meek, submissive” (Mosiah 3:19) Doesn’t that seem to contradict what I said earlier about children being self-centered? But children’s self-centeredness starts as a survival mechanism because of their total helplessness and dependence. They truly need others to survive. We need to recognize that we are that dependent spiritually on our Father in Heaven. That is the kind of humility that counteracts selfishness. When considering God’s wisdom, knowledge and power, of what have we to boast anyway?

So now here I am blogging. As I write this and other posts I find some of the same kinds of questions entering my mind, though not about my appearance as the focus was with public speaking. (I did have some thoughts about sending mixed messages by including the picture of myself at the beginning, but will leave it as a simple illustration.)

Most of my worries have been about possible negative reactions to what I write. I am concerned about being misunderstood and realize my responsibility to state things clearly and in a way that conveys the intended meaning. I am sure some will disagree with me, contradict my conclusions, or be critical of not only the content but also the presentation. Some may take offense at what I write. Like me, other people don’t like to hear things that seem critical of them. I can only control my intent and try not to offend, but I realize that some will choose to take offense and even respond by attacking me. I have to ask myself if I can handle those possible negative reactions. Am I confident enough in the truth and value of the message I am trying to convey? Can I separate the message from the messenger (about ME) and see criticisms as simply a difference of opinion and perspective, rather than a personal attack?

Somewhere in the back of my mind are thoughts about potential issues in the case my writings are well received. It would seem that blogging is an obvious way to draw attention to oneself. Isn’t it somewhat self-centered to think that you have something to say that people would want to hear? Like most blogs, I included a LIKE button and opportunities for people to “follow me”. At this point I have no illusions of becoming some great blogger with thousands of followers hanging on my every word. But still, it does make me feel good to hear approving comments. There is a possible seduction here: to write what is pleasing to gain that approval; to seek to become popular. That was not my intent in starting this blog, but can I keep my focus on the messages I present, rather than write for the LIKE’s?

I have thought about making and placing a sign above my desk: IT’S NOT ABOUT YOU! For now, I will just hope that the little voice will keep reminding me when I start getting too into myself – “It is not about you, Karen.”