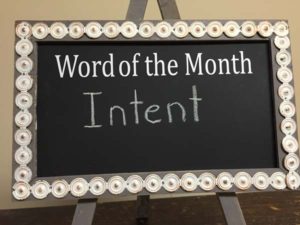 Sometimes at the beginning of a yoga class, the instructor will invite us to set an intention for that particular session. This is supposed to direct our focus during that time toward some specific purpose or idea. Very often authors or speakers will make an initial statement which basically amounts to their intent for that particular writing or speech. The Preamble to the Constitution of the United States is in effect a statement of intent.

The definitions of intent, intention and intend include concepts of directed and firm mental attention toward a specific object, plan, goal or aim. The term intent carries with it the understanding that we are purposeful and thoughtful human beings. We are not simply “things to be acted upon”. We can plan and carry out intentional acts. Intent is critical to determining whether a crime has been committed. Understanding intent can make a great difference in judgement of and reactions to the actions of others. Often we do react without much thought, though there can be intent behind seemingly reflexive and especially habitual reactions. Sometimes that intent is intimidation through anger. Sometimes an intent may be selfish and manipulative – to get something we want or to avoid something we do not want. We might need to practice becoming more aware of the intent behind our actions. Often we are not conscious of our intentions, or we are not honest with ourselves about them.

It would seem important when communicating with others, that one’s intent be clear and understood. There have been times in my life when my intent was definitely misunderstood, which caused difficulties. I have also been guilty of misreading another’s intent and reacting inappropriately.

So it does seem fitting that at this time of beginning – somewhat new Blog, new Facebook Page, new Word of the Month program – that I begin by articulating my intent. I will begin by clarifying what I do not intend in respect to this blog and Page.

I do not intend to be a complainer. Of course, there are things that bother me which I will likely write about, but my intent is more to present a point of view and discuss issues and principles. I will sincerely try not to be whiny.

I do not intend to belittle, insult or offend any specific individuals. I say that fully realizing that my very first blog post last year was in response to something currently in the news and directed at a particular individual. I publicly apologize to him/her for any hurt caused and pledge in the future to be more sensitive. (Though I am not deleting that post because it made some good points) I do intend, however, to critically discuss behavior and practices that I think are right or wrong, along with principles involved and the reasoning behind my positions. I will try to state objections to behavior without attacking any particular persons who engage in such behavior.

My intent is to discuss principles and ideas behind many things that are happening in our society today. I do intend to present a spiritual perspective. If anyone takes offense at such things, that is their choice. It is not my intent to be offensive by stating my beliefs.

My intent in expanding to a Facebook Page for this Blog is to encourage some meaningful and thoughtful discussion of topics I present. I fully understand that others don’t share my perspective and I am open to learning from theirs. I do intend to attempt to keep such discussions respectful and considerate and would request that anyone reading and commenting do the same.