I have had tornado nightmares. I live in Utah, which is not generally known for tornadoes, so these nightmares might have seemed unrealistic and nothing to worry about. One involved a vivid image of a car in my driveway being lifted up in the air and turned upside down – with people I love inside it. In another there was a view of a menacing funnel approaching a soccer field. At that time I was spending a good deal of time at soccer fields, sometimes during storms.

Later I had some nerve wracking experiences in other states. On a cross-country trip with my Dad, I remember watching a scary looking storm follow us as we drove into Sidney, Nebraska. We parked his motor-home in a RV park and tried to settle in for the night. I noticed in the restroom/shower building a sign indicating that this structure was our tornado shelter. I spent a pretty much sleepless night feeling the wind rock the motor-home while heavy rain pounded the tin roof, wondering if a sudden alarm might send me running with who knows how many other people to that little building. While visiting my daughter after she moved to Illinois, I took her children to a local park and did hear a tornado siren. It sent me into a panic, even though I could see no signs of a severe storm. I gathered the kids and hurried back to their home to learn that it was a routine drill. (They did have a tornado while they lived there, which touched down not far from their home, but they were safe)

We did have one tornado in Utah, which has been know as THE Utah tornado. It went through downtown Salt Lake City. I heard about it on the news and personally saw some of the damage some time later. Here in Utah we are not unfamiliar with wind storms. We frequently have severe winds coming over the mountains and through the canyons. I have many wind experiences, even watching a couple of our big spruce trees blow over.

That was until September 22, 2016. There was a storm forecast, but earlier in the day it was quite pleasant, so I went out to do some fall yard work. One thing that surprised me was how suddenly the weather changed. Within minutes the previously sunny sky darkened and the wind started. I looked up and saw a huge scary dark cloud rising over our house. So I picked up my tools, threw them in the garage, then ran into the house. During this brief time, the wind got much stronger and seemed to be swirling around with leaves blowing every direction. I got inside barely in time. I ran to the back of the house and looked out on the deck. I was sure that if the patio umbrella was up it would soon be somewhere down the street. Fortunately my husband had removed it and it was laying on the deck. By this time the rain had started and then hail pounded. I don’t think I have ever felt such forceful hail. I was afraid windows might break. This was a scary storm, but being in Utah, I was not thinking tornado and going down to the basement or even to the inside bathroom never occurred to me. I was watching out the windows. Then I heard a big bang and noticed the power was out. I continued to watch out the windows, even the back ones, but mostly saw sheets of hail. I could not see far into the yard. It was a while later as it calmed down a bit that I noticed our power meter box laying on the deck with wires going over the railing. And I looked back further into the yard and saw gaping holes where two huge spruce trees had been. The tree on the end next to our fence had landed on the power lines and ripped the meter box off the side of the house. 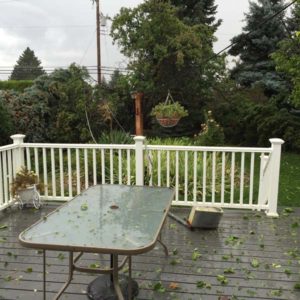 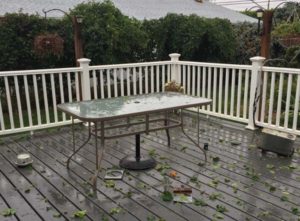 The Electrical meter is on the left 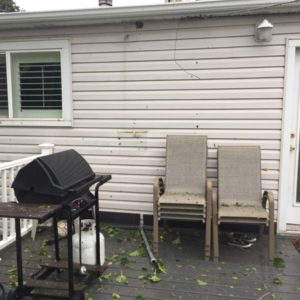 This is where the meter box used to be

It was much later that evening, after my husband and I had taken refuge in our daughter’s illuminated South Weber home, stuffed her freezer with our food and had our phones charging, that we heard the word “tornado” attached to this storm. We learned that an actual tornado had touched down in Washington Terrace – about a mile from our home. It took much more time for it to really sink in, and for us to entertain the possibility that the path of this tornado very likely went east along Highway 89 through South Ogden and tossed our trees along with a number of those in neighboring yards. Whether it actually touched down in our more immediate area, I am not sure, but the damage was quick and random and nothing like previous wind storms that had blown over other trees.

There are some lessons I learned from this tornado, and the five days of darkness which followed for us: 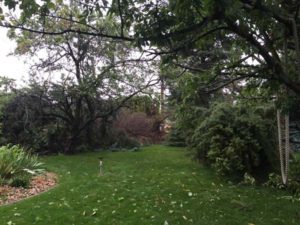 The trees before clean up 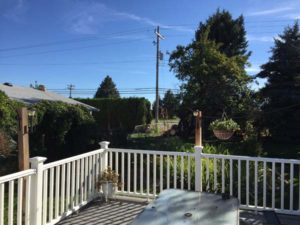 Our new view of the power pole, and the highway.

Not long after this storm, on Saturday October 1, we watched General Conference of the Church of Jesus Christ of Latter-day Saints. Elder Quentin L. Cook, one of the Twelve Apostles, shared a story about his father and a power pole. Rather than marring the view, his father saw the pole as a reminder of his gratitude for electric power. Now I have a similar reminder.

Earlier that morning of October 1st, as I drove across town to my grandson’s soccer game, I followed a beautiful rainbow. This also was a symbol to me that storms do end, there is much beauty in our world and much to be grateful for.

A shorter version of this post was published in the Ogden Standard-Examiner http://www.standard.net/From-the-Community/2016/10/10/FROM-THE-COMMUNITY-Lessons-I-learned-from-Northern-Utah-s-tornado.html