I am feeling somewhat burdened by stuff. Having lived in the same house for 36 years where my husband and I raised three children who have since moved out, I fully realize that we have accumulated a lot of stuff – way too much stuff. I and my siblings have also been encouraging our 90-year-old father to get rid of some of the stuff he has acquired during his long lifetime and stored over 50 years in the same house. My father grew up during the depression and has a deeply instilled sense that things should be kept in case there is a future shortage or they may again be useful to someone. He is now willing to give away things to family members, but there are definite differences between what he thinks might be useful and what they might really want.

My children are of a generation which seems to be able to easily dispose of stuff. If they find later that they need something they got rid of, they just buy another. I personally am somewhere in between – I really want to rid myself of unnecessary stuff cluttering my home and life, but I also see value and meaning in some things, which makes it harder to let go. 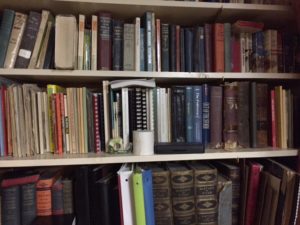