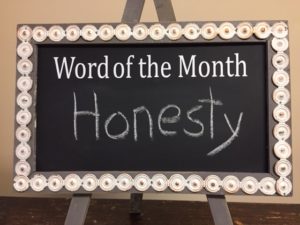 Some thoughts about honesty in a world of deception, relative truth, and rationalization.

Honesty is an admirable virtue. It is an aspect of good character, an indicator of a good person. There are generally two aspects of honesty – honesty in speech and action. These are reflected in two of the Ten Commandments: Thou shalt not steal and Thou shalt not give false witness. But honesty goes beyond these outward manifestations.

To be truly honest, there must be a clear standard of truth with which to be true. There are a plethora of laws dealing with all of the potential instances of dishonesty.

One could insist that it is the intent at the core of honesty or dishonesty that matters. If the intent is to mislead or deceive, that is clearly dishonest, while those who are misinformed may speak untruths without awareness. Deception is the presentation of opinion, belief, or perception as truth.

When we do not act in accordance with real truth – absolute truth – we are deceiving ourselves. We deceive ourselves first because we want to believe we are okay doing what we want to do. We then seek agreement from others to validate our own false perception and actions.

The prevalence of “relative truth” really messes with honesty. How can one be truly honest when speaking what is really false? How can one honestly speak truth which directly contradicts the truth another honestly expresses?

I frequently hear two phrases which make me cringe and question: “I’m telling you” and “You have to believe me”. Both of these imply that if someone says so, we must accept that as the truth, even if our own perception, experience, or knowledge of the truth tells us it is not. One person may be just as likely as another to have an inaccurate understanding of truth. It basically comes down to whom we trust. We are more likely to trust those we want to believe or what “truth” is consistent with “my truth”. Or in other words, what makes you feel like you are honest.

It is easy to be “true to oneself” if you can first define that truth yourself. It is much more of a challenge to be true to the truth, which is real honesty.

Those people whose characters are basically dishonest set themselves up as a law unto themselves – they are their own God. They want to do what they want without negative consequences. They reject God’s laws and standards. They find ways around man’s rules and laws. They rationalize and evade responsibility.

Dishonesty always accompanies and in a way compounds any other sin or violation of law. That need to justify ourselves is really dishonesty with ourselves. Overcoming any sin or weakness first requires honesty about the nature of that sin or weakness and taking accountability for one’s actions.

The first step toward honesty or greater honesty is recognition that truth exists outside ones self. Honesty is conforming one’s words and actions to truth, rather than contorting “truth” to fit one’s conduct, words, or even thoughts and ideas.