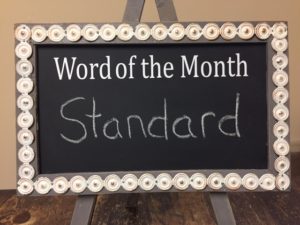 What are standards and why do we need them?

A standard is a set point against which things can be measured. Standards are effective when generally understood and accepted by all and when set by an appropriate authority. Standards within an organization provide order and consistency. They instill confidence in the quality and safety of products, services and personal conduct. Our confidence in leaders is determined by the standards that they live up to.

Moral standards serve similar functions to promote order and safety in society as well as personal well-being and progress. We all will not measure up to standards at all times. We are human. But without standards, we have no idea how far off course we are or whether we are even going in the right direction. Standards serve as a guide to make corrections. We can have a sense of security and peace when we live up to standards.

Moral standards are often expressed with imagery of something upright and lofty, or straight and solid. A flag or a banner acts as a standard – a visible symbol for an idea, which is the real standard. People rally around such a standard as a united force for a cause.The scriptures use the symbol of the “strait and narrow path”. 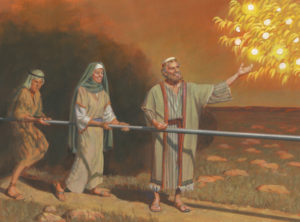 In the Book of Mormon Lehi had a dream which included an image of an iron rod – straight and solid and unbending. The iron rod was placed to guide travelers from one point to the desired destination, which was the Tree of Life. We are told in the Book of Mormon that this iron rod represents the Word of God. (See 1 Nehi 8:19-24) What more sure and solid standards could there be than those provided by a loving, wise and all-knowing God?

God’s laws and commandments have been the basis of moral standards for generations. I have seen within my lifetime what appears to be a systematic assault on God’s standards. The approaches vary, but the source and intent are the same. It is Satan who seeks to attack, undermine and destroy God’s standards and in the process destroy our happiness and peace.

Human constructed standards are given as a replacement for God’s moral standards. These can range from the rules of a gang to the pervasive political correctness of our society. The acceptance of such substitute standards by any group make them binding, at least for that group. These substitute standards become the basis for shame culture. They may promote conformity, but not necessarily in a good way. 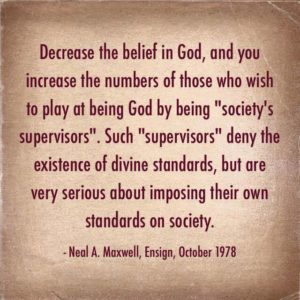 Satan has determinedly worked to move standards away from those set by God gradually over time. But if standards are not fixed and sure, can they really be considered standards at all? Maybe they are just guidelines? Or even just current suggestions, subject to change at any time. Where is the security there? If all that is required is public opinion to change standards, then one of the following strategies would work just as well.

Satan tries to convince us that standards are not necessary at all, or even worse, that they are bad. They are restrictive and confining and stifle freedom. A lie behind this is that no one, or no entity has a right to impose moral standards on others. This leads to the next strategy.

If God or society is out of line in setting standards for everyone, then each individual has the right to set their own standards. If one can stay true to whatever standards they determine, then they can feel morally upright, right? Does it matter that everyone is living by different standards? If your standards are low enough, you can feel good about doing anything, or not doing anything. If a standard exists just for an individual, is it really a standard?

Deviations in Any Direction

Satan uses various tactics to get us to deviate from God’s standards. It is not that he really wants us all to accept a particular substitute standard, just that we reject God’s standards for anything else. It really doesn’t matter that potential deviations might contradict each other. Consistency is not important. Confusion is more effective for his purposes. That is why he employs all of these strategies at the same time. He knows that what might cause one person to deviate from or reject God’s standards might not be the same thing that would cause another to.

What Satan really wants is to entice us to violate God’s standards. The particular rationalization is not important. The result is. God gave us commandments and standards for our benefit – for our progression and happiness. Satan desires us to be “miserable like unto himself” (2 Nephi 2:27). This may not be immediately apparent if we are convinced that we will be happy doing what we want and feel justified that it is morally right according to whichever standards we accept. But then, how can one know that he might have greater happiness, safety and growth by following God’s moral standards, unless he follows them?