Could we all be suffering from different forms of the same basic disorder – each falling somewhere along a spiritual disorders spectrum?

The Process of Change

I recently read a book about a woman’s personal story of overcoming and changing her life in a positive way. As I read, I was flashing back to another book that I read almost 30 years ago by a man sharing his story of personal change and overcoming.

Though their challenges were different, both of these people went through essentially the same process – a spiritual process of rebirth, a change of heart, a spiritual awakening, and an accompanying change of their lives. At the time I read the earlier book, I was involved with a Twelve Step program and this book was recommended as an example of that process. This man’s issues did not involve substance abuse, but his recovery process was the same as those who did. The Twelve Steps have been successful for people with a variety of addictions, including things like gambling and addictive relationships.

As I thought about it, the question arose: If the process of change, recovery, or overcoming is essentially the same, are the problems addressed really just different manifestations of the same underlying condition? We hear many things talked about in terms of a “spectrum.” It occurred to me to borrow some terminology and rephrase the question:

Is there a spectrum of spiritual disorders – a variety of manifestations with varying degrees of severity, but all the same basic spiritual condition?

If this is the case, then what is that basic underlying condition? Some commonalities in stories of recovery, which include details about the decline before the overcoming, relate to basic human needs being unfulfilled or emotional wounds inflicted. To fill the holes or relieve the pain people turn to substances, activities or relationships in an attempt to feel better. Unfortunately, most of those things provide only temporary relief, then leave one feeling worse. This is part, but I think it has more to do with the Natural Man and the spiritual death caused by sin.

There are eternal laws and principles which have been expressed to us as commandments. I think that spiritual disorders are manifestations of yielding to the Natural Man – of violating the commandments of God and thereby suffering a spiritual death. That is precisely why the cure, or the path to recovery must be spiritual. It must involve the only one who can heal spiritually.

A few examples on the spectrum idea:

Honesty is a basic principle that most agree is good. It is expressed in the Commandments “Thou shalt not steal” and “Thou shalt not bear false witness”. We have numerous secular laws defining the details or the letter of the law. There are countless ways that this law can be violated, and it seems that creative people keep coming up with more.

The spirit of the law is to be truthful and honorable rather than deceptive or deceitful. The process downward usually is gradual. Satan provides temptations. Most of us deep down know what is right and wrong, but yielding to small temptations can start a path toward more serious violations until one’s nature becomes dishonest. At this point one is in a kind of bondage. The way out may seem simple – just start being honest. But it would require a change of nature, not simply a change of behavior. For even if one stopped lying or stealing but still had deceptive thoughts and desires, he is still basically dishonest.

The unique thing about this particular issue is that there is a kind of dishonestly which accompanies almost all other spiritual disorders. We are not honest with ourselves about the nature of the problem. We rationalize or dismiss the seriousness of it, or we even pretend that it is really good. We can become blind to our condition.

The Ten Commandments do not include any prohibitions which relate to the abuse of substances, but there are other laws and commandments which do. The Word of Wisdom lists several things to avoid, though there can be debate about specifics. The spirit of this law would involve other eternal principles relating to the body being a temple and our stewardship to care for it properly. The abuse of substances – even some good ones used to excess – is accompanied by a similar spiritual decline. It becomes easier to violate other commandments or laws when we have been compromised. Addictions are usually accompanied by dishonesty and often immorality.

Chastity is another eternal law or principle. It is expressed in the commandment “Thou shalt not commit adultery”. One could get hung up on the technicality of the letter of the law, but Jesus taught a higher law which implies that feelings and intent can be sinful without the specific action. Scriptures have added “or anything like unto it” perhaps because people can be very creative in violating the spirit of this law. Satan’s influence in our society has gradually and insidiously changed the definition of those “like unto it” practices. The “Free Love” promoted to my generation has resulted in abandoning commitment by seeking self-gratification until this has become the norm. More recently we have seen a change from sexual sins being about behavior to becoming about identity.

But isn’t it all the same? The process of change for all these various spiritual symptoms tells me that they are all the same spiritual disease underneath. They are just different effects of a spiritual death. The Natural Man in whatever chosen variety has overtaken the spiritual. 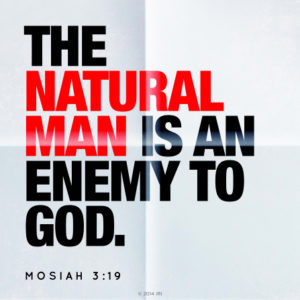 The cure is to come to Christ so He can change that nature so we “have no more disposition to do evil, but to do good continually” (Mosiah 5:2). I have seen this process in my life and the lives of many other people. It really happens. How can we affirm that Christ can change people’s hearts, yet suggest that some manifestations of the Natural Man are set and unchangeable?

Loving All Who Have Spiritual Disorders

As children of God and brothers and sisters, of course we should show love to everyone. But expressions of love can be easily misinterpreted.

I think it is easier to show love to someone who is honest about their struggle to overcome whatever their spiritual disorder may be. Most of us understand that this process is long and hard, so would be supportive rather than condemning when there are slips and setbacks.

The real challenge I see is loving those who have settled into their spiritual disorder – who have embraced the Natural Man – and want acceptance of that as not only an unchangeable aspect of identity, but even as a positive thing.

Returning to my previous spectrum examples, I pose some questions:

I could love a friend who was making money dishonestly, but would love require that I give him my life savings? Does loving someone who lies to me mean that I must accept their lies as truth?

I love someone who is an alcoholic. It would obviously not be loving to tell him that he is worthless or horrible. (He has told himself that plenty) But would it be loving to say, “You can’t help it. It is just the way you are. Here, have a drink?”

Love given and love received are not always interpreted the same, probably because most people are really seeking acceptance of their present state – the Natural Man.  True Charity is more about seeing that divine nature in all children of God, however it may be masked by sinful behavior, and treating others as God would. That also involves being honest with them. It is not loving to agree that right is wrong and wrong is right.

Our Own Spiritual Disorders

We also must be honest with ourselves. If we all fall somewhere along this spectrum of spiritual disorders – we all struggle with some effects of the Natural Man – how dare we decide whether or not someone is deserving of love just because of their particular manifestation? If we have progressed along the path of overcoming, we should remember and have some compassion for others, even those who appear content where they are. We all deserve to be treated with compassion, kindness, and love. 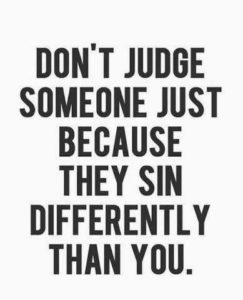