Any attempt to separate consequences from actions or accountability from agency is in effect seeking to destroy agency.

I first thought to do a word of the month on accountability, since that seems to be in short supply in some circles today. I had also considered using agency as a word of the month. The more I thought about it, I realized that agency and accountability need to be presented together. They are two sides of the same coin. One cannot really function without the other. I am also beginning to understand more clearly how Satan seeks to destroy agency by trying to remove accountability.

Being an Agent to Act

Agency is defined as an active force or power. More than simply making choices, it involves the ability and power to act. Being an agent to act involves the power to plan, set goals, make preparations and carry out one’s own plans. We are familiar with professional “agents” who are paid to act in someone else’s behalf for a specific purpose. In a moral sense, we all individually are “free agents” with the ability, privilege, or obligation to act for ourselves. Scripture tells us that there are “Things to act and things to be acted upon” (2 Nephi 2:14). Human beings are things to act. They are “agents unto themselves” as explained in the Doctrine & Covenants:

“Verily I say, men should be anxiously engaged in a good cause, and do many things of their own free will, and bring to pass much righteousness; For the power is in them, wherein they are agents unto themselves. And inasmuch as men do good they shall in nowise lose their reward.” (D & C 58:27-28)

Elder David A. Bednar explains further:
“In the grand division of all of God’s creations, there are things to act and things to be acted upon. As sons and daughters of our Heavenly Father, we have been blessed with the gift of moral agency, the capacity for independent action and choice. Endowed with agency, you and I are agents, and we primarily are to act and not just be acted upon.”

“Free” Agency or Actions with Consequences?

Using the term “free agency” we usually focus on the “free” – we think of freedom to do as we please, to choose what we want. We think of a lack of compulsion to do what we don’t want to do.

If we properly focus on the action of agency, we also must recognize the partner of consequence. Science tell us that “for every action there is a reaction”. In terms of personal use of agency, for every action, there is a consequence. We act because we want a result. Sometimes the actual result is not what we intended or hoped for. Sometimes our actions may seem futile. But there is always some result of the action, even if that is what happens within us through making the effort.

The purpose of agency in the Grand Plan is for our growth and progression. We learn through the consequences of our actions to choose good. As we choose good more, we actually become better. What we are to become is the real goal. 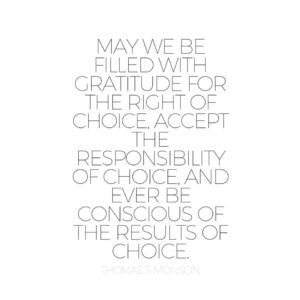 Satan seeks to destroy the agency of man. Because agency is given by God, Satan can not deprive us of it. I read an article which addressed a common conception among Latter-day Saints about Satan’s proposal to save “all”. We often think of that strategy as forced compliance with God’s laws. Then because his plan was rejected, Satan is now doing all he can to thwart God’s plan by attacking agency. But we are told in the Book of Mormon:

But Whatsoever thing persuadeth men to do evil, and believe not in Christ, and deny him, and serve not God, then ye may know with a perfect knowledge it is of the devil; for after this manner doth the devil work, for he persuadeth no man to do good, no not one; neither do his angels; neither do they who subject themselves unto him.” (Moroni 7:17)

So it would seem inconsistent with his character to force men to do good. I think Satan’s approach was more to remove accountability. He wanted to redeem all including those who chose to do evil. By removing accountability for use of agency, consequences become random and we are merely “things to be acted upon.” If all choices are morally equal, then what does choice mean? Doing good accomplishes nothing if doing evil gets the same reward. There is no purpose to life or anything. The Prophet Lehi, in the Book of Mormon explained:

Satan’s first lie in the Garden of Eden “You shall not surely die” denied the expressed consequence that God attached to the commandment not to eat of the fruit of the Tree of Knowledge of Good and Evil. (see Genesis 2:17; 3:4; Moses 4:9-10; 2 Nephi 2:17-18) So one way Satan seeks to destroy agency is by separating it from the consequences – by removing the accountability half. He suggests ways to avoid negative consequences – denial, rationalization, secrets. He tries to convince us that we are not responsible for the consequences of our actions. We look for others to blame. We play a victim role. We become “things to be acted upon”.

Other Tactics to Undermine Agency

Satan encourages systems which diminish personal agency, whether on the scale of Governments or interpersonal relationships. The term “Agency” also refers to an organization which acts in some way, supposedly to benefit people. By turning to agencies or governments for assistance, sometimes we surrender personal agency to them. In societies with a supreme ruler – a King or dictator – personal agency is diminished. Accountability is also effected. If people can only act as they are compelled to act, then those doing the compelling are actually accountable for the actions. The people become those who are acted upon – they become victims. Though the ability to act or think for oneself may remain, agency is effected when consequences are randomly or unjustly given.

The grand Plan of God requires personal agency. God knew that with that agency we would all make bad choices. This is how we learn, but some consequences are devastating and lasting. So a Savior was provided to atone for all of those consequences. Christ’s sacrifice still keeps agency intact. He cannot force salvation on anyone. It still requires an act of personal agency – an act of faith and sincere repentance – to access the atonement. Ultimately it is our choice. 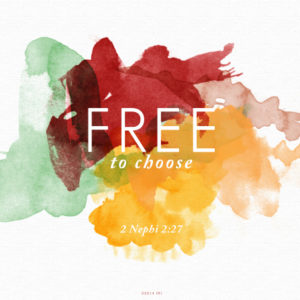