When addressing “consent”, it is important to make a distinction between consenting to an action or behavior and giving consent to a person. It seems that whichever perspective is used depends less upon the actual intent of the person choosing, and more on the political agenda of those using the argument. (An obvious, to me, example is the bakers and florists who refused consent to creative acts which they found morally objectionable, yet these situations have been manipulated into discriminatory refusals to individuals because of who they are. This may seem to not apply to what I am about to discuss, but that is my point.) 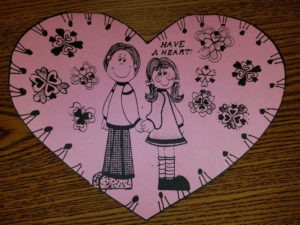 A seemingly innocent situation of a simple 6th grade Valentines Dance resulted in local media attention and outrage. Of the many issues involved with potential for outrage, one in particular emerged and became THE ISSUE, due to it being associated with the currently in vogue outrage – #MeToo.

In an effort to promote inclusion, the students were told not to refuse to dance with anyone. Both boys and girls would have certain dances for which they would do the asking. One girl’s mother protested, saying her daughter should have the right to say no to any boy. This turned into an example of the need to empower girls to say no to boys to prevent future abusive #MeToo situations.

The real problem I see is with abandoned standards, rather than girls being taught not to “say no”. The issue needs to be addressed in terms of consent to appropriate behavior, not which boys to choose.

I remember the “sexual revolution”. The result was that anything and everything relating to sexual behavior became okay between “consenting adults”. So “consent” was left as the only guide or rule. Also because of that liberation, there is now implied consent to any sexual behavior, leaving the issue one of choosing which persons to consent to. If you have no objection to the behavior, then your refusal is seen as a rejection of the person, right?

What does Consent Mean?

Consent is very fuzzy. There is implied consent or assumed consent, or even coerced consent. Consent can be given on one occasion, but not another based on how someone feels at the moment. How does consent or refusal need to be expressed? There can be mixed messages which are hard to interpret. When does yes mean no or no mean yes? I read about an incident where there was obvious consent, but then regret after the fact, which resulted in recent accusations to join in #MeToo.

If consent is given to individuals, then it relies on personal judgement of character. In the situation of the Valentines dance, it is implied that these 11 and 12 year old girls have sufficient judgement to know which 12 year old boys are potential abusers. Obviously many adult women lack that judgement.

With these 6th graders, and unfortunately with many adult women and men, actual consent is based on superficial things – appearance, popularity or power. Consent can be given because of an expectation of getting something in return, even if that is just to have the right people like you.

We have seen that powerful men are hard to say no to – whether that be for sexual favors or for other things. Sexual predators have learned how to manipulate consent. They carefully groom victims, earning trust with flattering messages. So consent alone is pretty shaky.

Consent Based on Standards

How much more clear it was when there were standards. When the standard was sexual relations between a man and a woman married to each other, then anything else crossed that line. Of course that line was often crossed back in the day, but with the accompanying understanding and often guilt. When standards are clear to all, some things should not even be asked because the obvious answer is NO. Yet, now we have people like Vice President Pence openly mocked for holding to a personal standard of behavior.

To be effective, standards should be based on behavior, not personality or appearance. A standard of dating only “tall, dark and handsome” men is not really a standard, it is a preference. When girls are empowered to set appropriate standards, then saying no becomes a matter of defending their personal boundaries, not rejecting a person or being swayed by the desire to be popular. If boys understand those same standards, their expectations may temper their behavior. If they don’t want to be rejected, then their behavior must be appropriate.

So is the important thing to empower girls to say no to boys/men, without any clear way to distinguish the good guys from the bad guys? Or would it be better to teach all kids – girls and boys – appropriate standards of behavior, encourage them to personally commit to certain standards and say no to anyone who would try to compromise them, and to show respect for the personal standards of all, regardless of whether they agree with them?