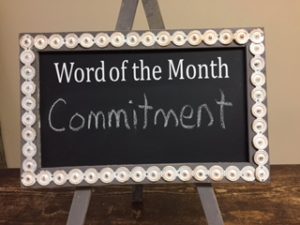 What is your word worth – whether a resolution, oath, legal contract or verbal promise?

“I solemnly swear. . .” This month of January there will be many people taking oaths – primarily an oath of office for those newly elected to leadership positions in Government. I recently joined an organization where the process of becoming a member included taking an oath to uphold the purposes and goals of the organization. In court, witnesses take an oath that their testimony will be the truth. How much do we think of these oaths and how seriously do we take them?

An oath is defined as a covenant, pledge, promise or vow to do certain things. It is a public proclamation and manifestation of what should also be an inner personal commitment. Though taken before other people and often with much ceremony, the purpose is much more than to satisfy others that our intentions are good and honorable. It is a solemn and sacred promise, usually pledged in the name of God. When we swear in His name, we recognize a need for His help to fulfill responsibilities – “so help me God” – and we recognize that He is our witness to this commitment. Implied is the realization that we will be judged by God as to how well we keep this pledge. God knows and judges the intents of our hearts as well as our sincere efforts.

Many people traditionally make “resolutions” at the beginning of a new year. A resolution is basically a decision to do something. We assume this comes with some firmness and determination to do what is resolved, however most New Years Resolutions amount to a casual statement of good intentions to improve some things. Some take these more seriously than others, but in general most do not really expect them to be lasting, and few really are. There are not serious consequences for breaking them. We can make the same resolutions again next year. A resolution or statement of good intentions without a serious commitment or specific goals is not really worth much.

In our society oaths are not always taken seriously either. Today it seems that legal contracts, which are signed, witnessed and notarized, are too easily broken. Marriage vows are even taken lightly. We face so many disclaimers and detailed user agreements, in effect because we do not expect others to keep their word and everyone anticipates having to create a legal case against another. Oaths in court are kind of taken seriously, at least there is an overlying legal threat if they are proven to be broken. Oaths taken to join an organization are said routinely, but probably not thought much about after. (I actually had to look up the wording of the oath I took to remember what it was I had agreed to)

In the past people would simply give their word, maybe accompanied by a handshake, and that would be binding. It meant something.

In the Book of Mormon we read about people who did take verbal oaths very seriously. This may be hard for us to comprehend because our society is so different. Even the wicked Lamanites refused to make an oath not to war anymore when they were in a situation of surrender. They were willing to face death rather than make an oath that they knew they could not keep. (Alma 44:8)

Are we willing to face death rather than go against an oath we have taken? Are we even willing to accept the consequences of breaking a contract or defaulting on a verbal agreement? Would we do all in our power to fulfill any obligations that we have agreed to, or would we think it doesn’t matter? How good is our word?

Commitment Rather than Resolution

So rather than make a list of “resolutions” this year – what amounts to a wish list of good intentions – maybe we should do some personal inventory and make a serious commitment to do even one thing. Putting such a commitment into writing may help as a constant reminder. Sharing goals with another person who can later check on your progress can make us accountable to them. Perhaps we might just make an “oath” to keep our word and take more seriously previous commitments or resolutions.

Making an oath or covenant with God, makes us accountable to Him. It can also make Him a partner with us as we work toward keeping that commitment. We can remember that God is loving and long suffering. He knows the intents of our heart and the sincerity of our desires. He also knows our weaknesses and challenges. He does not expect instant perfection and He probably isn’t surprised when we fail. He knows that we will stumble and make mistakes, even if our intentions are sincere. He is more concerned with the desires of our heart and our honest efforts, than with the immediate results. He will be there to help us through the struggle if our desires are good and we seek His help.

May we solemnly and sincerely commit to improve in some way during 2017.